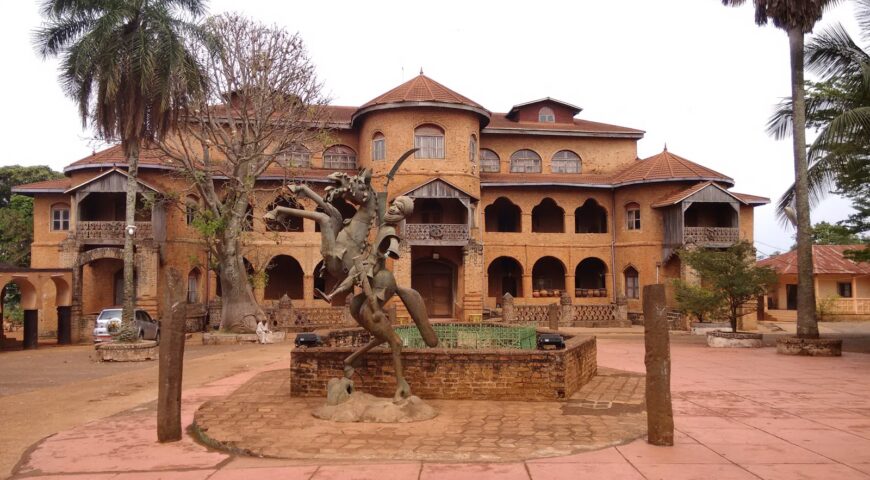 Foumban is one of Cameron’s popular towns rich with culture and receives a very large number of holidaymakers who visited annually to discover the numerous ancient buildings many of which are believed to have been constructed back during the time the German colonial rule by the remarkable Sultan Njoya, who invented a corn-grinding machine, a script for the Bamun language, and a religion which fused Christianity and Islam. He had 681 wives, which made him well qualified to write his own version of the Kama Sutra (look out for it in the museum shop).

Most outstanding of them all is the full Foumban Royal Sultan’s Palace which currently has a museum which has very interesting history concerning the kings of the Bamum right from 1394 to the current day. Museum artefacts include a ancient feathered cloak worn only for the initiation of each sultan, beaded buffalo masks sported by members of secret societies, documents written using Sultan Njoya’s script and a drinking horn made from the skull of one of his enemies.

It has a fascinating, well-organized museum providing great historical insight into the region. At the time of writing, the treasures were being transferred to a startling new building symbolically shaped as a serpent and a spider; the palace itself will remain open to visitors.

Some of the major important things found in the palace include a multitude of royal gowns, arms, musical instruments, statues, jewellery, masks and colorful bead-covered thrones carved in the shapes of the men who sat on them and seat of power for the Bamoun people.

Nevertheless, the palace is notable for the red natural brick used for the construction of the palace which features three floors. There was a fire in 1913 which burned down the palace, and the then-King Njoya ordered for a new one to be build, with the same design, finishing it in 1922.

Basically what was built then we see today, where in front of the building there is a small hexagon fountain surrounded with flowers and plants, where as next to it there is an equestrian statue of one of the sultans that once ruled the Kingdom.

The entrance is a turret tower with rounded sloped roof, which has tympanum terrace, and there are additional turrets on the left and right corners of the palace, with other entrances to the building. There are two long arched terraces on the ground and first floor, however, the second floor is enclosed with ox-eye-looking windows, finishing with the roof on which two gablets can be found.